Perfect Stick, driven by Allan Davis, scored an upset in conditioned trot action at Dover Downs Tuesday, Feb. 9. The Indiana sired mare completed the mile in 1:55.4 during the event. 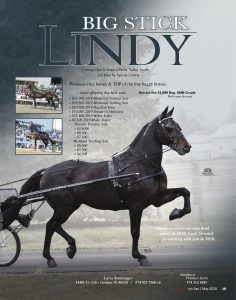 Big Stick Lindy, the sire of Perfect Stick, has found success on the Standardbred racing circuit as a sire, but is now crossing over to the competition driving circuit where he is also highly regarded.

Starting from post three, Perfect Stick got away in mid pack and made the decision to pull first over at the half in :57.3. From there, he was committed to lead the outside flow of traffic until the top of the stretch where he drew off from the field, winning by two lengths over Our White Knight and Russell Foster and Theresademoninme and Corey Callahan.

Perfect Stick paid $21.00 for the win. The seven-year-old daughter of Big Stick Lindy is now back in the ownership of co-breeder Allan Schmucker Jr. of Harlan, Ind. Schmucker purchased the mare in December of 2020. William Wyatt trains Perfect Stick, who was bred by Schmucker along with Pond-A-Acres and Timothy Schmucker. She now has 19 career wins in 115 starts with earnings over the $236,000 mark. Her career best time was recorded in 1:53.2 at Pocono Downs as a four-year-old.

Perfect Stick began her career in Indiana under the conditioning of trainer Mike Hollenback before heading to the East Coast. She sold for $19,500 in the November Blooded Horse Sale in 2018 and had been racing under trainer Anette Lorentzon until Schmucker claimed her at Dover in December. With five starts in 2021, Perfect Stick now has one win, one second and one third.

Perfect Stick’s sire, Big Stick Lindy, has had success in Indiana Standardbred racing in recent years but has now crossed over to the competition driving horses, seeing some great success in the show ring. He currently stands at Premier Acres in Goshen, Ind.

A second Indiana sired horse was a winner at Dover Downs Tuesday as Swan Legacy, driven by Tim Tetrick was a winner later on in the card. The four-year-old son of Swan for All sat patiently in third before moving out around the final turn and trotting home in :29.2 for the win by four lengths in 1:54.1. Blue Cupertino and Mike Cole finished second over Rock Party and Corey Callahan for third.

Swan Legacy is owned by Triple D Stables and Michael Ferriero. Scott DiDomenico trains the gelding, who is now two for three in 2021. The mile also set a new career best win time for Swan Legacy, who has in excess of $68,000 in earnings. The former Indiana Sires Stakes contender, conditioned by Dan Shetler, joined the DiDomenico Stable in November last fall following the conclusion of the stakes circuit in Indiana.