Swan in Motion picked up his fifth straight win in the third leg of Indiana Sires Stakes action Thursday, July 30 at Harrah’s Hoosier Park. The sophomore trotting sensation is now five for five in 2020. 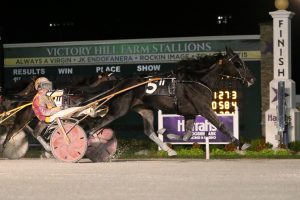 Starting from post four, Swan in Motion and Ricky Macomber Jr. got away in third as Emma Town Bud and Michael Oosting got the early lead, posting fractions of :28.4 and :58.4. Around the final turn, Swan in Motion began to attack and at the head of the stretch, had a clear shot to trot home for the win by one and one-quarter lengths over Emma Town Bud, trotting his final quarter in :26.1. Anchors Away and Trace Tetrick finished third.

Owned by M & M Racing and Norbert Maza, Swan in Motion stopped the timer in 1:54.3. The Swan for All colt is now seven for 16 lifetime with more than $261,000 in career earnings. His best career time was taken earlier this year in 1:53.2. Sold under the name of Skyway Kramer, Swan in Motion was knocked down for $15,000 at the Hoosier Classic Yearling Sale. He was bred by Lyle Slabach. His full sister, Skyway Katy, is also part of the Jamie Macomber Stable at Harrah’s Hoosier Park and the two-year-old has had two starts so far in her career.

In other Indiana Sires Stakes action for sophomore trotting colts and geldings, Dude Included earned his second win of 2020 with a victory over TJ’s Top Pick in the first division. Driven by John DeLong, Dude Included sat right on the back of TJ’s Top Pick the entire mile, pulling out and trotting home in :27.1 for the two-length win in a new career best time of 1:53.0. Bluebird Deacon and Jay Cross finished a close third.

Dude Included is owned by Benjamin Graber and trained by Trent Stohler. The Class Included gelding now has three career wins and earnings over the $129,000 mark.

Earlier on the Thursday card, fans were treated to a big performance by two-year-old pacing colt Brookview Bullet. The Always A Virgin gelding, trained by Justin White, scored an eight-length win in 1:52.2, pacing his final panel in :26.2 with Trace Tetrick aboard. Eleven Star Stables owns Brookview Bullet, who was making his first career start. He was a $12,500 purchase from the Hoosier Classic Yearling Sale from the Brookview Farm consignment.