Shelby County has a lot of history in the state of Indiana, and the Chicken Inn, a long-established restaurant in Shelbyville, has its walls lined with historic photos. The photos range from a tribute to Sandy Allen, the world’s tallest woman, to a man famous for selling peanuts in the downtown area in the late 1800s. Included in the lineup of photos is a shot taken of Pearle Hungerford. 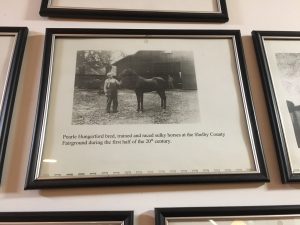 A photo of Pearle Hungerford with one of his horses at the Shelby County Fairgrounds hangs in a display at The Chicken Inn in Shelbyville depicting the area’s most notable members. (Photo by Tammy Knox)

Hungerford was an active driver, trainer and owner of Standardbred horses in Shelby County. He maintained several horses in training at the Shelby County Fairground where the photo on display was snapped. However, Hungerford is probably more well known in the area for two other incidents in the 1920s.

According to the Sept. 19, 1921 Shelbyville Democrat, Hungerford was on his way home driving his automobile when it was struck by an east bound Pennsylvania passenger train, causing quite a stir in the community. A graduate of the Indiana School of Law in 1904, Hungerford was unhurt in the collision and made the front page of The Democrat five years later once again when he was a democratic candidate for the Indiana legislature.

According to the Shelby County Historical Society, Pearle and his son, Paul, spent many years breeding and racing Standardbreds and were well known to display their favorite horses on the side of their barn at their farm on Route 9 in south Shelbyville.