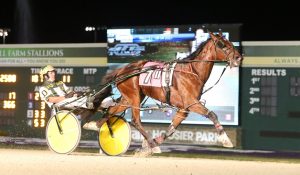 Paw Patrol and John DeLong romped to victory in 1:52.2 Wednesday, Aug. 4 in their first trip to the winner’s circle. Photo by Dean Gillette

Starting from post seven, Paw Patrol rolled out quickly with intentions of taking control of the front end and was on the outside at the quarter in :28.1 before making a break. DeLong got the freshman regrouped and found a spot in third as Whatstrublnudragon and Michael Oosting set middle fractions of :57.0 and 1:25.0. Whatstrublnudragon was on top by three at the top of the stretch but Paw Patrol never let the leader out of his sights.

In the stretch, Paw Patrol kicked into another gear and rallied home in :26.3 to score the win by seven and one-half lengths. Whatstrublnudragon finished second over Mystic Waze and Atlee Bender for third.

Paw Patrol paid $8.00 for the win. He is trained by Jay Hochstetler for owners Ernest Gaskin Stables Inc. and Loren Schmucker. Chapel Ridge Farm bred the gelded Luck Be Withyou son, who was making his third career start. He was one of 61 foals by Luck Be Withyou that went through the sale ring at public auction last year.

Paw Patrol garnered a sale price of $8,000 at the Hoosier Classic Yearling Sale, but was not sold. His current connections recently purchased him at the beginning of July. He is the second foal from Iam Total For Real by Total Truth. He has a yearling brother by Rockin Image named Rockinforreal who will be in the sales this fall.