Pansy’s Image, the Indiana Sires Stakes champion, scored a win in conditioned pace action Monday, March 15 at Miami Valley Raceway. Guided by Tyler Smith, the five-year-old daughter of Rockin Image posted a time of 1:56.0 for the win over a sloppy track. 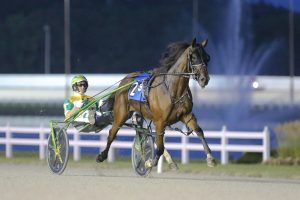 Pansy’s Image, shown as a three-year-old with driver Trace Tetrick, scored her first win of the year in 2021 at Miami Valley Raceway Monday, March 15. Photo by Dean Gillette

Pansy’s Image got away with quick early speed only to be overtaken at the quarter by Glenferrie Bronte N and William Mann. From there, they sat patiently on their backs before moving out in the stretch and striding by for the win by a length over Glenferrie Bronte N. Arrival and Trevor Smith finished third.

Trained by Tim Lane, Pansy’s Image was the second favorite of the field, paying $5.80 for the win. She is owned and bred by Emerald Highlands Farm of Ohio. It was the first win of the year in four outings for Pansy’s Image. In all, she has eight wins in 47 starts and earnings over the $225,000 mark. Her career best time of 1:50.4 was taken as a three-year-old at Harrah’s Hoosier Park.

Earlier in the card, it was old timer ER Truevalue in the winner’s circle. The 10-year-old son of Total Truth, who originated from the Eash Farm in Greenfield, Ind., got away in mid-pack before closing well in the stretch for driver Trevor Smith to pick up the win by four and one-half lengths in 1:57.3. Silver Spir and Brett Miller finished second over A List and Tyler Smith for third.

ER Truevalue is now owned and trained by Robert Rogan of Ohio. He now has 29 career wins in 274 career starts with earnings in excess of $247,000. His career mark was taken as an eight-year-old in 1:52.2 at Harrah’s Hoosier Park. Rogan has owned the veteran racehorse since early November last fall.