Three-year-old trotting fillies were featured Wednesday, July 29 at Harrah’s Hoosier Park with two divisions on tap. A pair of Swan for All sophomores brought home the top prize in each division as Rock Swan and Swan Bomb scored wins in the third leg of Indiana Sires Stakes. 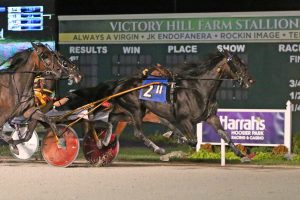 After little impact as a two-year-old, Swan Bomb has returned for her three-year-old season with a different result. The Jamie Macomber-trained filly earned her second career win in the Indiana Sires Stakes division and picked up a new lifetime mark of 1:55.4 in the process.

Driven by Ricky Macomber Jr., Swan Bomb started from post two and got away in mid pack as RJZ First Lady and LeWayne Miller got the first call followed by Hotel Whiskey and John DeLong. Following the half in :57.2 and three-quarters in 1:26.3, Swan Bomb began to move up on the leaders and timed her move just right, winning by three-quarters of a length over Laney and Saw Widger, who closed quickly for second. Amy Seay and Brandon Bates were close for third.

Swan Bomb trotted her final quarter in :28.0 for the win as a longshot, paying $19.00 to win. She is owned by Dreamville Stable of Ontario and was bred by Jonas Schlabach of Ohio. She was a $45,000 purchase from the Hoosier Classic Yearling Sale in 2018.

The other division saw last year’s trotting filly champ return with authority as Rock Swan and Trace Tetrick scored the win and a new lifetime mark in the process. Trained by Erv Miller, Rock Swan had a similar trip to Swan Bomb, moving up in the last quarter of the race to take over and trot home for the win in 1:54.2, a final quarter in :28.2. She was three and one-quarter lengths ahead of Skyway Tinacious and Peter Wrenn for second over Pretzel Party and Sam Widger for third.

Rock Swan is owned by S & R Racing Stables and Anthony Lombardi. It was her 11th win in 15 career starts and she now has in excess of $441,000 in career earnings.

Indiana Sires Stakes action continues Thursday, July 30 at Harrah’s Hoosier Park with two divisions of three-year-old trotting colts and geldings on tap. First post is set for 6:30 and the Sires Stakes features are set as Races 9 and 11 on the 14-race card.