A pair of Swan for All trotters scored back to back wins Wednesday, Jan. 25 at Yonkers Raceway. The trotters battled through a driving rain storm and foggy conditions to score the wins for Indiana. 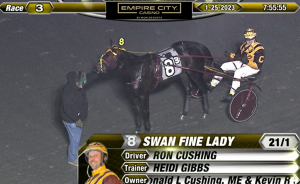 Swan Fine Lady was the first one up, competing in a $14,000 conditioned event. Her start was from the extreme outside and driver Ron Cushing made sure she was ready to roll when the gate folded. The duo powered out and challenged for the early lead. Suddenly, both horses also moving to the lead went off stride simultaneously and separately, leaving the top spot open for Swan Fine Lady. She trotted by the quarter in :28.3 with three lengths between her and the rest of the field. Swan Fine Lady continued to control the race at the half in :58.3 and saw competition coming up on the outside at the three-quarters and picked up the tempo slightly by the three-quarters in 1:28.1.

Around the turn, Swan Fine Lady continued to lead the way with Stone In Love and Scott Zeron ready to attack. They had sat at her back the entire way, but could not catch her late in the race. Swan Fine Lady was a winner by three-quarters of a length in 1:58.3. Stone in Love was second over Look In My Eyes and Braxten Boyd who moved up for third.

Swan Fine Lady paid $45.00 for the win. The five-year-old mare is owned by Cushing along with Kevin Sywyk and Lance Downs. Heidi Gibbs trains the mare, who was bred by Kristin Wagler.

It was the first win of 2023 for Swan Fine Lady, who scored 19 wins as a three-year-old in Indiana. She began her career on the Indiana Sired Fair Circuit at two and didn’t win a race during her freshman year. She came back strong at three with an 11-race win streak that included the $25,000 Governor’s Cup Championship at the Indiana State Fair. To date, she has $161,000 in earnings and a mark of 1:54.3 taken as a four-year-old.

Swan Fine Lady transferred to the Cushing barn last spring, racing at Plainridge and other places in the northeast. She was making her second start at Yonkers.

In the very next race, Big Bad Swan went to the lead from post one and never looked back, trotting strong through the wire for George Brennan in 1:58.1. PC Free Wheeling and Jason Bartlett finished two and one-half lengths back in second followed by Bazillionaire and Austin Siegelman for third.

Big Bad Swan paid $10.80 for the win. The seven-year-old gelding is owned by Triple D Stables and Betty Clegg. Scott DiDomenico trains the veteran, who has 19 career wins and more than $223,000 in earnings. His best time was taken at Harrah’s Philadelphia last year in 1:54.4. The well-traveled trotter started off in Indiana at two and three with little success but has taken off since moving to the East Coast. The high end claimer, bred by Bobby Brower and DM Stables, has been with his current ownership for the past year and a half.