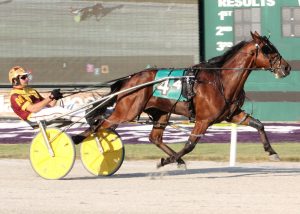 The first and fourth divisions were won by sons of Real Desire, who is a former winner of the Hoosier Cup at Harrah’s Hoosier Park. Ricky Macomber Jr. guided Sawyer’s Desire to a five-length win in the first division in a time of 1:53.0. He is trained by Ron Burke.

Not to be outdone by his stablemate, Nassau Desire and Macomber Jr. picked up a win in the fourth division, holding off Beachmaster Two and Fort Apache Scout for the win in a time of 1:53.2. Also trained by Ron Burke, Nassau Desire paced his final panel in :26.4 and remains undefeated in two starts for 2019.

The Rockin Image colt High Impression scooted home a winner for Sam Widger in the second division in a time of 1:53.0. The top three finishers were products of Rockin Image with Candys Image Rocks (Michael Oosting) and My House (John DeLong) finishing second and third respectively. High Impression is trained by Ernie Gaskin and is now two for two in his brief career.

The third division brought out nine starters, seven of which were sons of Rockin Image. Clever Character, driven by Dale Hiteman, paced home in :26.2 for the win in 1:52.4, the fastest division of the night in Indiana Sires Stakes action. The Tellitlikeitis colt is owned and trained by Tim Smith is also undefeated in two tries this season.