Rockin Nola has been the headliner this season for the Putnam Stable but a pair of pacing mares were doing their part to bring wins into the stable. Blues Queen and Rock the Look each had successful seasons and are both being retired to the brood mare ranks.

Blues Queen, an eight-year-old daughter of United Ace, retires with 31 career wins in 161 starts. She has had seven consecutive years of racing with wins each year. Her quickest mile to date was recorded during her five-year-old season with a win at Harrah’s Hoosier Park in 1:51.4. 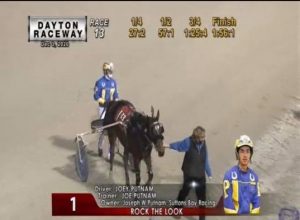 Rock the Look enters the winner’s circle for the final time this fall at Hollywood Gaming Dayton for driver Joey Putnam. She will be bred to JK Endofanera in 2021. Photo from Joey Putnam Facebook page

Trained by Joe Putnam, Blues Queen retires with a bankroll of $291,912. She was foaled in Etna Green, Ind. by breeder Stanley Miller. Debbie Brown and J P Racing LLC purchased the mare in early 2020 and will send her into the second phase of her career as a brood mare. She is booked to Rockin Image next year.

Rock the Look completed her racing season last month at Hollywood Gaming Dayton with a win in her final start. Driven by Joey Putnam, the eight-year-old daughter of Rockin Image has been a consistent performer since she was a two-year-old winning races every year. Her best time was recorded as a four-year-old at Scioto Downs in a time of 1:50.3. In all, Rock the Look has 35 career wins in 153 starts with more than $512,000 in career earnings.

While the two older mares head to the breeding industry, Putnam’s standout pacing mare Rockin Nola, who completed a stellar four-year-old season, including a start in the Breeders Crown, is currently enjoying some time off. Stabled at Putnam’s farm in Markleville, the Rockin Image mare jogs a few days a week and will be back in action in 2021.