The Plano Stable kicked off the Tuesday, March 30 racing program at Pompano with a pair of wins. Sooo Handsome and Flagman, both Indiana sired trotters, each visited the winner’s circle, giving Plano two wins in the first three races of the night.

Sooo Handsome kicked off the opener with a win in the $10,000 Open II Trot. Starting from post four, Plano hustled the gelding out of the gate and got a perfect two-hole trip behind leader Stick With Me Kid and Wally Hennessey. Following fractions of :27.4, :57.2 and 1:26.1, Plano tipped Sooo Handsome to the outside and trotted right on by, picking up the win by three and one-quarter lengths in a final time of 1:54.3. Stick With Me Kid held gamely for second over Boionganator and Kevin Wallis, who closed in late for third. 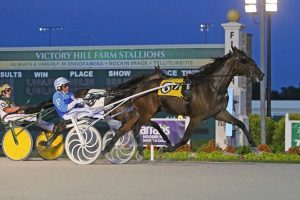 Indiana sired Flagman, shown winning with Rick Plano at Harrah’s Hoosier Park in 2019, is now four for four in 2021 with his latest win at Pompano Park Tuesday, March 30. Photo by Dean Gillette

Sooo Handsome is owned by Maryann Plano and was bred by the Planos. The eight-year-old gelding by Cash Hall earned his 42nd career win and his first of 2021. He moved closer to the $350,000 mark in career earnings for the Planos. His mark of 1:52.4 taken at Harrah’s Hoosier Park as a six-year-old stands as his career best time.

Stablemate Flagman continued the Plano winning ways in the third race, scoring a victory in the $8,000 conditioned trot. Starting from post two, others in the field had quicker gate speed, pushing Flagman back in the pack early. However, Plano wasted no time getting Flagman to the outside and headed toward the lead, a feat he accomplished by the half in :56.3. From there, Flagman increased his advantage at every marker, ending up a 12-length winner at the wire in 1:53.2. Chav Hanover and David Miller finished second, just a neck ahead of Creekside Pete and David Ingraham for third.

Flagman is owned by Maryann Plano and was bred by Pond-A-Acres. The four-year-old son of Guccio is now four for four in 2021. His latest mile also marked a new career best for the trotter, who now has eight career wins in 22 career starts. His earnings are now over the $88,000 mark for the Plano Stable.