A pair of Erv Miller-trained Indiana sired sophomores were on the track Friday, April 17 at Southern Oaks Training Center in Central Florida. A total of nine qualifiers were held, with a majority of the horses in the races from the Miller barn. 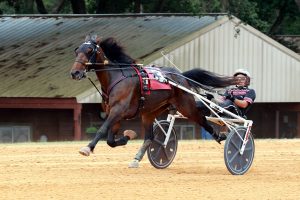 Anchors Away and Atlee Bender rally home for a win during qualifiers at Southern Oaks Training Center Friday, April 17. Photo by Senni Vilander

The first Indiana sired horse to pick up a win was Anchors Away, a three-year-old homebred son of Whom Shall I Fear. The gelding sat patiently behind Drain the Swamp and David Miller for driver Atlee Bender before pulling out in the stretch and striding home to the win in 2:00.0 with a final panel clocked in :29.2.

Owned by Geis Enterprise and Erv Miller Stable, who are also the breeders, Anchors Away was lightly raced last year at two, winning one of his four starts, picking up a mark of 1:57.2.

Miller’s second Indiana sired winner came in the eighth race of the day as Fox Valley Hustler went gate to wire for Bender for the win. Owned by Miller Stable, Geis Enterprise, Louis Willinger and Leland Mathias, the Time to Roll three-year-old was a two and one-half length winner over Hidden Cove and Hannah Miller in 1:55.2, a final quarter in :27.4. Fox Valley Hustler was lightly raced at two, winning three of his eight starts with a best time of 1:53.3 taken at Harrah’s Hoosier Park. He only missed the board twice in his young career last season.

Another familiar name from the Miller Stable was also involved in the qualifiers Friday. Woodside Datendiva, a three-year-old daughter of Guccio, finished second in her qualifier, timed in 1:58.1. Bender drove the filly owned by Miller and Tangie Massey, who made more than $70,000 last year at two.

The day’s activities at Southern Oaks Training Center was captured by photographer Senni Vilander. Beautiful photos are available on their Facebook page.