Several new stallions have made their way into Indiana for the 2021 breeding season, and one of those new names is the trotter Ontopofthehill. The royally bred son of Muscle Hill retired from the track this past fall, sold in the Harrisburg Sale, and is now standing at stud at the Don Swartzentruber Farm in Loogootee, Ind. 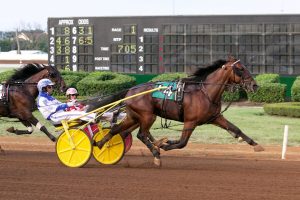 Ontopofthehill, shown winning a Kentucky Sires Stakes with driver Chris Page, will stand his first season at stud at Don Swartzentruber’s farm in Loogootee, Ind. in 2021. Photo by Nigel Soult, The Red Mile

Ontopofthehill completed his career with a mark of 1:54.0 at three and more than $110,000 in career earnings. The $250,000 yearling purchase was race timed earlier in the year at The Red Mile in 1:52.1. He is from the 100 percent producing mare On the Bright Side, who is a daughter of $2 million winner Passionate Glide.

“He (Ontopofthehill) stands over 16 hands tall and is an outstanding looking individual,” said Swartzentruber. “You can tell he was a $250,000 yearling purchase the way he looks. We are excited to have him.”

Ontopofthehill was not included in the Indiana Stallion Directory for 2021 due to arriving late in the state. However, he will be featured in an ad in the upcoming March issue of the Indiana Standardbred Magazine. He will stand for a fee of $1,500 at the Swartzentruber Farm. He joins ABC Garland at the farm.