Former Indiana Sires Stakes Champion On the Virg scored a win at Yonkers Raceway Monday, Feb. 15. The now seven-year-old gelding was driven by Brent Holland, paying $5.30 for the win. 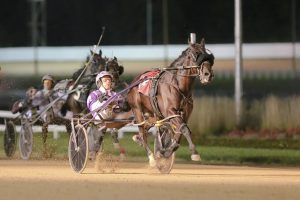 On the Virg, shown winning the Indiana Sires Stakes Super Final at two with Brett Miller, has kicked off 2021 in a big way. He is now three for four at Yonkers Raceway. Photo by Dean Gillette

Starting from post four, Holland sent On the Virg to the lead, securing the top spot by the quarter in :28.2. The Always a Virgin son continued an even pace, setting fractions of :57.1 and 1:25.2 before fending off opponents in the stretch to win by three-quarters of a length in 1:54.3. Heisman Player and Scott Zeron finished second over The Rev and George Brennan for third in the conditioned pace.

On the Virg is now trained by Paul Stafford.  Thomas Ceraso Jr. of Connecticut owns the gelding, who was bred by Lavon Miller. On the Virg is now three for four in 2021. The latest win was his 24th trip to the winner’s circle in 109 career starts. He is nearing the $400,000 mark in career earnings and his career best time of 1:50 was taken as a four-year-old at Northfield Park.

On the Virg is the final foal from Modern Bobbi, who is by Cam’s Card Shark. She is also the dam of Sara’s Lucky Charm, winner of $119,000 with a mark of 1:54.4. Sara’s Lucky Charm is the dam of Beckhams Z Tam, Breeders Crown winner and now standing at stud in Indiana.