Ollie’s Z Tam, former Indiana Sires Stakes contender, picked up a win at The Meadowlands Saturday, Jan. 23. Trained by Ron Burke, the five-year-old gelding won his first race of 2021 in his second start of the year. 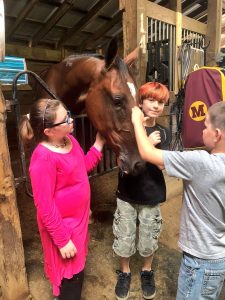 Starting from post three, driver Yannick Gingras had Ollie’s Ztam in race mode from the start, going straight to the lead to set fractions of :27.2, :55.3 and 1:23.4. In the stretch, the Tellitlikeitis gelding extended his lead over the conditioned field, winning by two and one-half lengths in 1:52.1, a final panel in :28.2. Sweet Rock and Todd McCarthy finished second over Seeuinnashville A and Andrew McCarthy for third.

A longshot in the field, Ollie’s Ztam paid $20.20 for the win. The homebred by Z Tam Stables LLC is now owned by Burke Racing Stable, Weaver Bruscemi, J & T Silva-Purnel & Libby and Frank Baldachino. He now has 11 career wins in 58 career starts. His career best time of 1:49.4 was taken as a three-year-old at The Meadowlands. He took a mark of 1:51.1 as a two-year-old at Harrah’s Hoosier Park under the direction of trainer Jamie Macomber.

Ollie’s Z Tam was always part of the annual fourth grade tours through the Macomber barn at Harrah’s Hoosier Park. The mild mannered gelding greeted visitors during the tours and was one of the student’s favorite horses.

Another Indiana winner on the card Saturday at The Meadowlands included another son of Tellitlikeitis as Ima Real Ladys Man scored a win in conditioned claiming action. Starting from post five, Simon Allard got Ima Real Ladys Man on the front early on and set the tempo at :27.2, :55.2 and 1:22.3. From there, the five-year-old gelding drew off from the field, opening up to an eight-length advantage at the wire in 1:51.4 for the win. JK Wildfire and Mark MacDonald finished second over Western Hill and Todd McCarthy for third.

Trained by Jeff Cullipher, Ima Real Ladys Man paid $4.60 for the win as the race favorite. He was bred by Perry Smith and owned by Pollack Racing LLC along with Jeff Cullipher. It was the first start of the year for Ima Real Ladys Man, who now has 12 wins in 53 career starts. His best time was taken as a three-year-old at Harrah’s Hoosier Park in a time of 1:50.1 and he now has earnings in excess of $210,000.