Ollie’s Z Tam, the former Indiana Sires Stakes champ and trainee of Indiana-based trainer Jamie Macomber, scored a win at Harrah’s Philadelphia Wednesday, Dec. 4. The now three-year-old son of Tellitlikeitis moved in for the win at the wire in 1:51.0 in the afternoon’s eighth race. 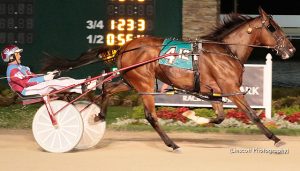 Now trained by Ron Burke, Ollie’s Z Tam sat in the garden spot during the mile for Yannick Gingras and moved out in the stretch for the win by a neck over Quality Bud and George Napolitano Jr. He turned in a final panel in :28.1 to secure the victory in the $14,500 conditioned pace.

Ollie’s Z Tam was also one of the popular horses on the backstretch tours to the Macomber Stable last year. The horse was very visible in many of the photos taken, especially during the Fourth Grade Field Trip days where approximately 600 students went into the barn to learn about racing and get a hands-on experience with the horses, thanks to the assistance of Macomber and her team.

Also on the Harrah’s Philadelphia card, Indiana sired Perfect Stick, who was purchased for $19,500 from the November Blooded Horse Sale last year, finished second in the sixth race on the card, a $14,500 conditioned trot. The Big Stick Lindy mare, formerly trained by Mike Hollenback, was first over and finished four and one-half lengths back in second to Rubber Duck. Perfect Stick trotted her mile in 1:54.3 with Marcus Miller in the bike for Anette Lorentzon.