The Indiana sire Kilowatt was prevalent in the state’s breeding program a decade ago, but rarely does one see a son or daughter on the racing circuit these days. Later on, the Western Hanover stallion stood in Brazil and earned success. Locally, Legal Transfer is still representing the throwback breeding as he picked up a win Tuesday, Jan. 21 at Miami Valley Gaming. 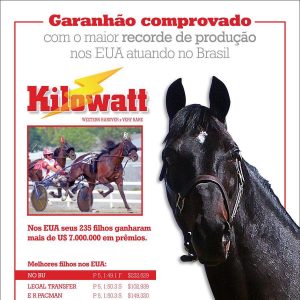 After standing in Indiana, Kilowatt ended up at stud in Brazil. This ad was featured on his Facebook page in 2016. Photo from Facebook

Legal Transfer, living up to his name, just completed his 10th ownership transfer and made his debut start a winning one for Adam Short, who also trains. The now 11-year-old gelding wired the field, posting his win in 1:52.2 by one and one-half lengths in the second leg of the Claim to Fame Series. His win was a surprise to the betting public, paying $11.60 for the win.

The win for Legal Transfer, who was guided by Jeremy Smith, was his 35th career victory. Not missing a year of competition in the past 10 years, the gelding bred by Ben Yoder of Goshen, Ind. pushed his career earnings to more than $250,000 with the win. His career best time was taken at Hoosier Park as a five-year-old in a time of 1:50.3.

Later on in the card, Sweet Mr Pinetucky, the tough Indiana sired trotter by Pinetucky, scored an impressive win in the evening’s featured $25,000 Open Trot. Guided by Trace Tetrick, Sweet Mr Pinetucky made a move just before the three-quarter mile marker and trotted home with the win by two and one-quarter lengths in a time of 1:53.3, a new career best time. Lester Raber trains the six-year-old, who now has 21 career wins and more than $230,000. He is owned by Raber and Floyd Raber and has two wins in three starts for 2020. Floyd Raber also bred the gelding.