Odds on Unicorn and Luke Hanners turned in a gutsy performance to score the win in the first race of the day at Saratoga Harness Monday, Nov. 28. The duo covered the one mile event in 1:59.3. 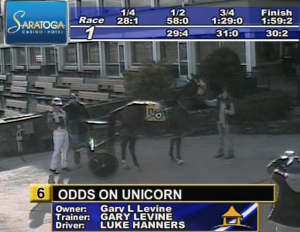 Odds on Unicorn, the well bred daughter of Rockin Image, scored her first win of 2022 at Saratoga Harness Monday, Nov. 28 with Luke Hanners in the bike.

Starting from post six, Odds on Unicorn left a little to get away fourth in the field of eight as River Belle was the first leader, making the lead but pressed on the outside by Blue Willow at the quarter in :28.1. From there, the mile was evenly rated as River Belle continued to lead the way. Blue Willow was still on the outside but lagged back at the half in :58.0 leaving Odds on Unicorn covered up with nowhere to go.

In the third turn, Odds on Unicorn found some racing room and moved three wide to get around Blue Willow and Henry Westbrook III. Once they tipped three-wide, it allowed Twisted Betty and Leon Bailey the chance to also move out and challenge the leader, keeping Odds on Unicorn three-wide down the backstretch.

Heading into the final turn, Odds on Unicorn was able to circle around her opponents and grab the lead, but she was joined by Stay Jelly and Brett Crawford, who used cover to move up into contention.

In the stretch, Odds on Unicorn had to dig deep to fend off Stay Jelly, a feat she accomplished by a neck at the wire, a final panel in :30.2. The top two finished 13 lengths ahead of the rest of the field with Pacin N Racin and Jim DeVaux finishing third.

Odds on Unicorn paid $15.00 for the win. The Rockin Image sophomore is owned and trained by Gary Levine. John McGill and Lavon Miller bred the filly, who earned her first win of the year and her second overall. Her career best time remains at 1:54.4 as a two-year-old taken at Harrah’s Hoosier Park.

Odds on Unicorn was purchased under the name Rockin Jem as a yearling by Odds on Racing for $30,000 from the Hoosier Classic Yearling Sale. She first went to Northfield before Levine acquired her in early November. It was her third start for Levine.