Odds On Osiris, a two-year-old son of Rockin Image, rallied from the back of the pack to score the win in the $55,150 Fox Stake 93 Wednesday, Aug. 7. The race was the highlight of the Grand Circuit card to polish off Standardbred racing for the 2019 Indiana State Fair. 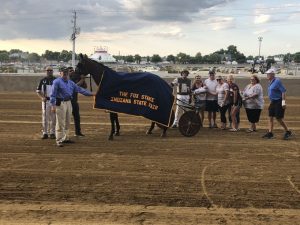 Odds On Osiris scored his first win of his career in the Fox Stake at the Indiana State Fair. Peter Wrenn drove the Rockin Image gelding to victory for his wife, Melanie, who serves as the trainer. Photo by U.S. Trotting Association.

Starting from post eight, Odds On Osiris and Peter Wrenn drifted over to the rail as The Candyman Can and Sam Widger set brisk early fractions of :26.2. and :56.1. Wrenn was able to get the Indiana bred in gear around the turn and moved in the stretch to take over the lead for the win by three and one-half lengths in 1:51.3, a final panel in :27.1.  The Candyman Can, also a son of Rockin Image, finished second over Fox Valley Hustler and James Yoder for third.

Owned by Odds on Racing, Odds On Osiris was making only his third career start and secured his first career win in the Fox Stake. He had previously raced in Indiana Sires Stakes action at Harrah’s Hoosier Park before his start in the Fox Stake for trainer Melanie Wrenn.

Sold under the name of Swiss Rocket, Odds On Osiris was purchased from the Hoosier Classic Yearling Sale for $60,000. He is the second foal from the standout race mare Antigua Hanover, who earned nearly $250,000 during her career and took a mark of 1:50.4. So far, she is a 100 percent producer with two foals of racing age. Rockinbythebeach, a full sister to Odds On Osiris, took a mark last year at two in 1:54.0.

The Wrenn Stable also connected for a win with Odds On Melanie in a division of the $12,075 Hoosier Stake. The Always A Virgin filly was a winner for Odds On Racing by a head in 1:54.1.