Odds on Osiris had nothing short of a spectacular season as a two-year-old in 2019. The son of Rockin Image earned in excess of $343,000 and equaled the track record time of 1:50.3 at Harrah’s Hoosier Park for freshman pacing colts. He was recently honored as both Indiana’s Pacer of the Year as well as Indiana Sired Champion Two-Year-Old Colt/Gelding Pacer of the Year at the recent Indiana Standardbred Awards Banquet. 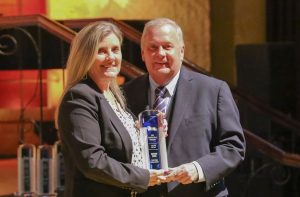 Melanie Wrenn accepts the award for 2019 Pacer of the Year at the annual Indiana Standardbred Awards Banquet. Rick Moore made the presentation. Photo by Dean Gillette

Owned by Odds on Racing, Odds on Osiris won seven of his 10 starts. He was also victorious in the prestigious Fox Stake during the Indiana State Fair. The colt was bred by Merlie Schwartz of Peru, Ind. and was driven by Peter Wrenn. Melanie Wrenn handled the training duties of the standout freshman.

During the awards ceremony, Melanie was on hand to receive both awards for Odds on Osiris. In the upcoming issue of the ISA Magazine, Melanie was incorrectly identified in the photo for 2019 Pacer of the Year. Rick Moore made the presentation to Melanie, who is currently overseeing the stable as it competes during the winter months at Pompano Park.

The incorrect captions were caught after press time of the magazine, which should be arriving in homes later this week. We apologize for the errors.

Congratulations to all the award winners from 2019 and best of luck to everyone in the upcoming season.