Odds on Osiris has been an exceptional racehorse in his two years on the track. He just achieved another milestone, getting a win below the 1:50 time barrier with his latest win in Indiana Sires Stakes action Friday, Oct. 9 at Harrah’s Hoosier Park. It was a night of speed where 12 out of 14 races were under the 1:53 time barrier, four of which were 1:50 or faster. 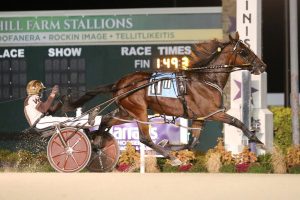 Driver Peter Wrenn looks over at the timer as Odds on Osiris gets a sub 1:50 career mark in Indiana Sires Stakes action Friday, Oct. 9 at Harrah’s Hoosier Park. Photo by Dean Gillette

Odds on Osiris was the favorite of the 12-horse field of three-year-old colt and gelding pacers in the first of two divisions of Indiana Sires Stakes action. It was the seventh and final preliminary round to set up the Super Finals coming up next weekend, and the Wrenn Stable had Odds on Osiris at the top of his game.

Starting from the second tier in post 11, Odds on Osiris had to wait his turn on the front as The Candyman Can and Sam Widger were the first leaders at the quarter in :27.2 followed by Caribbean Escape and John Delong, the second leaders at the half in :55.0. Odds on Osiris was out and rolling before the half and was leading the way by open lengths when the field turned for home. Rallying with a :27.3 final panel, Odds on Osiris crossed under the finish line in 1:49.3 for driver Peter Wrenn with broken equipment. Sawyer’s Desire and Trace Tetrick finished second three lengths back. Caribbean Escape finished a nose back in third.

Owned by Odds on Racing and trained by Melanie Wrenn, Odds on Osiris earned his fourth win in eight starts this year and moved to just under the $600,000 mark in career earnings. He is 11 for 18 lifetime heading into the Indiana Sires Stakes Super Finals and is eligible to the upcoming Breeders Crown later this month at Harrah’s Hoosier Park. Merlie Schwartz bred the son of Rockin Image.

In the other division of ISS action for sophomore pacing colts and geldings, another heavy favorite scored the win as Clever Character and Sam Widger won in 1:50.2 over Frankiepark and Ricky Macomber Jr. Crook Boyzz and Brandon Bates finished third.

Trained by Ron Burke, Clever Character is owned by Burke Racing Stable, Weaver Bruscemi, Frank Baldachino and Lawrence Karr and bred by Freedom Hill Farms of Illinois. The Tellitlikeitis gelding earned his second win of the season in 12 starts. The time of 1:50.2 equals his career best taken earlier this year at Harrah’s Hoosier Park. Clever Character now has in excess of $240,000 in career earnings.