The quality of three-year-old colt and gelding pacers is nothing short of above average this season in Indiana Sires Stakes action. Two divisions containing a total of 17 sophomore pacing colts and geldings were featured on the Friday, Sept. 18 racing program at Harrah’s Hoosier Park. All 17 paced under the 1:53 time barrier, 14 of which dipped under the 1:52 time barrier. Odds on Osiris and Dojea Gizmo both earned wins in their respective divisions with Odds on Osiris picking up the quickest time of 1:50.1. 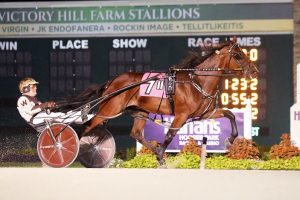 Odds on Osiris and Peter Wrenn equaled their career best time in the sixth round of Indiana Sires Stakes action Friday, Sept. 18 at Harrah’s Hoosier Park. Photo by Dean Gillette

Odds on Osiris had to opt for a mid-pack spot early on from post seven as Crook Boyzz and Brandon Bates went out to the early lead, posting the first quarter in :26.2. It wasn’t long before Peter Wrenn had Odds on Osiris out and rolling, passing by the half in :55.2 on the outside before securing the top spot around the turn.

In the stretch, Wrenn tapped Odds on Osiris and he picked up the pace, striding home as smooth as silk in :26.4 for the win in 1:50.1. Crook Boyzz finished one and one-half lengths back in second followed by Always and Again and John DeLong for third.

Owned by Odds on Racing, Odds on Osiris is now three for seven this year, equaling his career best time in the sixth round of Indiana Sires Stakes. He improved his career earnings to more than $575,000 under the direction of Melanie Wrenn. The Rockin Image gelding is eligible to the Breeders Crown this year, set for Oct. 30 and 31 at Harrah’s Hoosier Park.

In the second division, Dojea Gizmo and Dan Shetler surprised the field of eight with a near gate to wire effort for the win in 1:51.0. Starting from post three, Shetler moved Dojea Gizmo to the front after the first quarter in :27.2 and held steady throughout the remainder of the mile. In the stretch Family Recipe and James Yoder charged up to challenge, but Dojea Gizmo was able to hold on for the win by a neck. Clever Character and Ricky Macomber Jr. finished third. Dojea Gizmo rallied home in his final panel in :26.2.

Owned by Shetler and Dojea Stables, Dojea Gizmo paid $32.40, $8.20, $4.60 across the board. The Tellitlikeitis gelding equaled his career best time in the effort, matching his win at the Indiana State Fairgrounds. With five wins in 11 starts this season, he increased his career earnings to more than $75,000 with the win.