Odds on Osiris, the quick freshman pacer last season from the Melanie Wrenn barn, has been ranked fourth on the recent “Sneak Preview” list published in the April issue of “Hoof Beats.” The Rockin Image colt moves into his sophomore season off last year’s stats of seven wins in 10 starts, which made him the 2019 Indiana Pacer of the Year in addition to divisional honors. 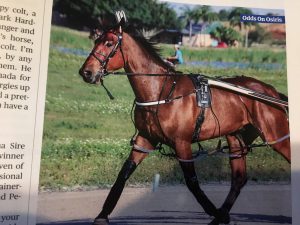 Odds on Osiris is shown preparing for his sophomore season from the Wrenn Racing Stable. Photo by Chris Tully for Hoof Beats

Odds on Osiris was a dominant force in the Indiana Sires Stakes but really caught the attention of racing fans by winning the Fox Stake at the Indiana State Fair with driver Peter Wrenn at the controls.

In the “Hoof Beats” preview, Peter Wrenn noted, “He’s a nice horse, but he’s got a chance to be a real horse. We’ll look to get ready for the North America Cup and then we’ll leave him out of the East Coast stakes for a while. We’ll come home and get ready for the bigger stakes in the fall. We didn’t want to have too many coals in the fire. Hopefully, we can meet up again with the Grand Circuit horses in the fall.”

Odds on Osiris took his best time of the year at Harrah’s Hoosier Park in 1:50.3. In all, he earned in excess of $343,000 to receive the fourth-place ranking among sophomore pacing colts for 2020.