The $12,500 Claim to Fame Series putting the spotlight on fillies and mares in the claiming ranks got underway Tuesday, Jan. 11 with two divisions. One of the divisions brought Indiana sired Odds On Algorithm to the wire first in an upset win. 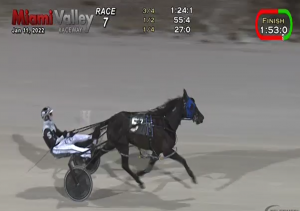 Odds on Algorithm was a big upset winner in the first round of the Claim to Fame Series at Miami Valley Tuesday, Jan. 11.

Starting from post five as a longshot at 14-1, Odds On Algorithm was unwatched early as Ideal’s Nicole made a bid for the front, securing that spot for driver Josh Sutton after the quarter in :27.0. Trevor Smith got Odds on Algorithm to the outside headed to the half behind cover as it was five in, four out at the half in :55.4. Around the final turn, Odds on Algorithm was pushed three wide so she could get into contention for the lead and had the call at the head of the lane. In the stretch, the mare fought hard, winning by one and one-half lengths over Dancing Lisa and Tony Hall in 1:53.0. Always Be Lucy, another Indiana sired product by Always a Virgin, finished third for Mitchell Cushing.

Odds on Algorithm paid $31.60 for the win. The five-year-old daughter of Always A Virgin is owned by Back Magic Racing of Ohio and trained by Todd Luther. Mahlon Lambright is the breeder on Odds on Algorithm, who will now race under a new stable as she was claimed by William Cantrell. Always Be Lucy was also claimed by Chad Slone out of the first leg of the Claim to Fame Series.

Odds on Algorithm was making her first start of 2021. She now has nine wins in 51 starts with her career best time of 1:51.4 taken as a three-year-old at Harrah’s Hoosier Park. She has combined earnings of $75,000.

Odds on Algorithm was one of 71 yearlings by Always a Virgin sold in 2018. She sold under the name Rock’n Roll Virgin for $45,000 and was acquired by Odds On Racing with a name change to their stable moniker. She is from the race mare Rock n Roll Baby, who is a 100 percent producing mare. Odds on Algorithm is her quickest with JKs Rollin Baby, a two-year-old last year who earned $77,000 in her first year of racing. Odds On Algorithm has a JK Endofanera half sister named Rollin Rosie that will be on the track as a two-year-old in 2022 with a weanling filly by Tellitlikeitis named Tella Babe who will be in the yearling sales this fall.