The highly anticipated October issue of the ISA Magazine is now arriving in homes. The 65 publication has 19 different farms represented with advertising for the upcoming Hoosier Classic Yearling Sale and also other sales in the area. 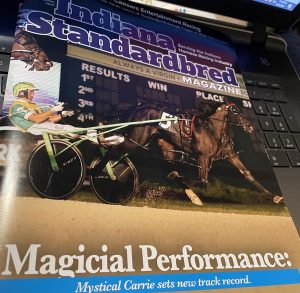 The October issue of the ISA Magazine is now arriving in homes. The magazine features numerous ads for Indiana farms prepping yearlings for the upcoming sales.

There were three track records broken since the last issue was released. Rockin Nola eclipsed the 1:49 mark for older pacing mares with a win in 1:48.4 followed up by Mystical Carrie, who also broke the older pacing mares record with a time of 1:48.3 the very next week. Mystical Carrie is featured on the cover. In September, Fulfullnmydestiny, driven and trained by James Yoder, broke the two-year-old record with his mile in 1:49.2.

In addition to a look at the yearlings coming up for the sales, the ISA Magazine features stories on Clay Craib and a young girl named Grace Kelley who thanks to the generosity of Dave White, got the thrill of a lifetime with a trip around the Indiana State Fair racetrack behind the trotter Mclass. The following week, Mclass was a winner at Harrah’s Hoosier Park and repeated with another win two weeks later for the White Stable.

Recaps of Dan Patch Night, the Governor’s Cup Championships, and the Grooms of the Week at Hoosier Park are also featured.  Other stories include a look back at the early days of Hoosier Park, a report on the HHYF Camp at the Jay County Fairgrounds, and also a look at the Indiana State Fair display during this year’s fair.

Also, a special congratulations to Owner-Trainer Ernie Gaskin on his upcoming induction into the Indiana Horse Racing Hall of Fame.

The ISA Magazine will offer one more issue for 2021 that will arrive in homes in early December.