The Clinton County Fairgrounds played host to seven races for the Indiana Sired Fair Circuit Tuesday, July 13 with several repeat winners making it to the winner’s circle. Northern Rocks and trainer-driver Alvin Miller scored a win in a division of the three-year-old colt and gelding trot near the end of the card. 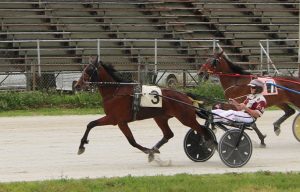 Starting from post one, Northern Rocks made his presence known early, grabbing the top spot to set fractions of :30.0, 1:00.4 and 1:31.3. Jessies Outlawed and Doug Rideout waited patiently along the rail as Woodside Emery and Bradley Ferguson moved up to challenge around the final turn.

In the stretch, Northern Rocks held his ground to earn the win in 2:01.3. Jessies Outlawed finished one and three-quarter lengths back in second followed by Charm N Caesar and Jack Kieninger Jr., who moved into third.

Northern Rocks is owned by Martin Schmucker, who also bred the son of Guccio. The sophomore trotter now has four wins in 14 starts this year with his best time of 2:00.2 taken at Converse, his home track. Overall, he has accumulated more than $22,000 in earnings for his connections.

In the other division of sophomore trotting colts and geldings, Keith Bourbon turned in a dominant gate to wire effort for trainer-driver Doug Rideout. The Guccio sophomore gelding had open lengths between him and the rest of the field the entire way, trotting home in :30.1 for the win by more than eight lengths in 2:01.1. Come to the Table and Jay Cross finished second over Pilgrims Image and Lester Raber for third.

Keith Bourbon is owned by Alan White, who also bred the gelding. It was his third win in 15 outings this season with his best time recorded at Harrah’s Hoosier Park in 1:57.2. Lightly raced at two, Keith Bourbon now has $14,000 in his career with over $13,000 of that earned in 2021.

Another top performer on the day was Luckychris from the Curtis Rice Stable. The two-year-old Luck Be Withyou colt returned to the ISFC this past weekend at Kendallville and has earned two wins in a row. His latest win at Frankfort was posted in 2:00.1 over the good track with Clifton Bell aboard. Luckychris was an eight-length winner over Family Four Ever and Jeff Dever. Rockinwitharythm and Matt Rheinheimer finished third.

Luckychris, owned by D and R Racing Stable of Kentucky, is now five for seven this year and undefeated in ISFC action. His quickest time was a track record performance at Converse in 1:58.0 in mid June. He was race timed at Harrah’s Hoosier Park in Indiana Sires Stakes action in 1:53.2.

The ISFC is back in action Wednesday, July 14 at Frankfort. First post is 6 p.m.