After going winless in 11 starts as a two-year-old, Northern Rocks has found his winning stride in 2021. The sophomore son of Guccio has now won eight races this season, including five of his last six starts for trainer-driver Alvin Miller. 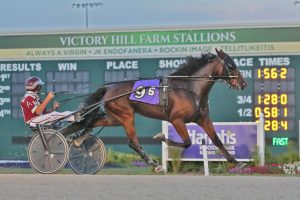 Northern Rocks started his season at Harrah’s Hoosier Park, even testing the waters in Indiana Sires Stakes action. But his connections felt a move to the Indiana Sired Fair Circuit would be beneficial. He won his first start on the ISFC at his home track at Converse. That win seemed to be the turning point for the gelding. He reeled off five wins in six starts, which made him eligible to the Governor’s Cup Championships at the Indiana State Fair.

Guided by Miller, Northern Rocks was a convincing winner in three-year-old trotting colt and gelding action in the $25,000 Governor’s Cup, winning by more than four lengths in 1:56.3. After a 10-day break, Miller and Northern Rocks scored their first career pari-mutuel win at Harrah’s Hoosier Park Wednesday, Aug. 25 in a new lifetime mark of 1:56.2, winning by three and one-quarter lengths, a final quarter in :28.2.

Northern Rocks, owned by breeder Martin Schmucker of Grabill, Ind., now has more than $42,000 in career earnings. More than $34,000 of that tally has been recorded this year. He is the son of Matriarch, who earned a mark of 1:55.4 and earnings of more than $170,000. As a broodmare, she has now produced four winners in six foals of racing age. She has a two-year-old colt by Dover Dan named Dovers Arch that has not started yet.