A total of 59 Indiana Standardbred Association (ISA) members came together for the holidays at the annual 2018 Northern Indiana ISA Christmas Party last week. In addition to outgoing ISA President Jack Kieninger, directors Doug Rideout and Dr. Alan White were also in attendance for the evening filled with food, fun and giveaways. 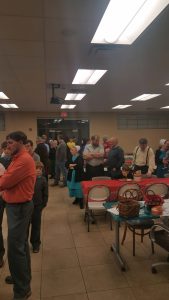 Tiffany’s of Topeka, Ind. provided the food for the event, which included a buffet-style setting of chicken, ham and potatoes. ISA members provided the side dishes and desserts, which took up two tables. 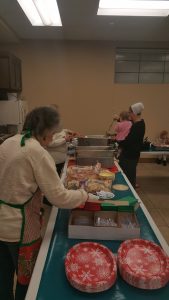 A glimpse at the food line for the 2018 Northern Indiana ISA Christmas party with a wide array of food items. (Photo by Jack Kieninger)

Several rounds of drawings were held, both for the adults and the kids. A special ISA Santa table was set up for the kids to select their prizes from the drawings while adults enjoyed receiving gas cards. The Grand Prize children’s winner was Bryn Udell, who won a children’s snowman kit.

Kieninger won the gift basket given by Harrah’s Hoosier Park. He also asked everyone in attendance to select one of the extra toys left over from the event and donate it to a worthy cause.

Kieninger also gave an update to the group regarding the past year of racing in the state of Indiana. He explained the Indiana Horse Racing Commission had approved the ISA recognition application along with racing dates and the contract for Harrah’s Hoosier Park. He stated he feels good about the partnership with Harrah’s Hoosier Park and said the partnership has agreed to host the 2020 Breeders Crown. Kieninger closed with an emphasis on the upcoming legislative session, which will include some very important topics concerning horse racing and urged all ISA members to keep in touch with their local representatives. Kieninger also expressed his gratitude for serving as ISA president for the past 10 years and told the group he would see them at the races.

The ISA Banquet to honor all champions from 2018 has been set for Saturday, Jan. 26 at the Indiana Roof Ballroom.