According to a story from CBS 4 in Indianapolis, Elkhart County will soon add an Amish Buggy lane to several major thorofares in and around Wakarusa, which is southwest of Goshen, Ind. The area, which is saturated with Amish communities, will begin work on the addition of these lanes in 2020. 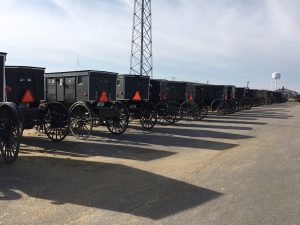 The volume of Amish buggy traffic on local roads is high in the Elkhart County area. Officials have announced they will add Amish buggy lanes to several major roads in that area beginning in 2020. (Photo by Tammy Knox)

The addition of “buggy lanes” is in response to recent accidents involving Amish buggies in that area. Many of the members of the Amish communities in northern Indiana are involved in Standardbred racing in the state through breeding farms. Many of the horses that retire from racing are also sold into the Amish communities to serve families for transportation and work on the farms.