The Indiana Standardbred Association (ISA) has sent out letters to all members regarding the upcoming election for the Board of Directors. A total of six positions will be filled later this fall in November for the 2020 ISA Board. 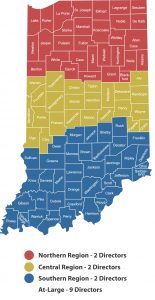 Nominations for the 2020 ISA Board of Directors are now being accepted until Wed. Sept. 25 at the ISA Office.

One director each will be elected from the Northern District, Central District and Southern District. A total of three directors will be selected At-Large. Several individuals have already placed their name on the ballot for next year’s board.

Nominations of candidates for director from the ISA membership may now be accepted. Any nomination must be accompanied by a petition signed by at least 50 paid members of ISA. All nominations are due into the ISA office by Wednesday, Sept. 25. Nominations with petitions may be mailed to the ISA office at: 311 American Legion Place, Greenfield, IN  46140.