The Indiana Standardbred Association (ISA) is now accepting nominations for the next election for the board of directors. A total of five At-Large positions are up for grabs effective with the 2021 racing season. 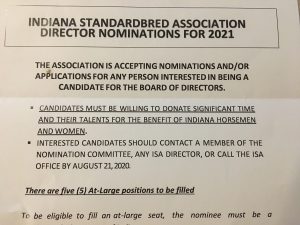 A total of five At-Large positions on the ISA Board will be up for grabs for the 2021 racing season. Elections will be held later this fall.

Individuals interested in pursuing a position on the ISA Board should be willing to dedicate significant time to the board. All nominations should be in to the ISA by Aug. 21, 2020. Those interested may call the ISA Office, talk to an existing ISA Director or talk with a member of the nomination committee. Sarah Conrad chairs the nomination committee which includes Jeff Cullipher and Emily Dever, both ISA Directors.

To be eligible for an At-Large position on the ISA Board, individuals must be a resident of the state of Indiana. Elections for the positions will be held this fall.