A total of 19 races will be featured at the Elkhart County Fairgrounds Monday, Aug. 19 to continue action for the second half of the Indiana Sired Fair Circuit (ISFC). First post is 11 a.m. 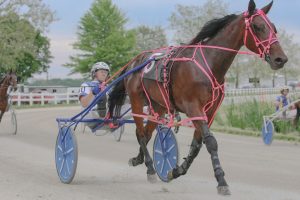 Peachy Bombay, fresh off her win in ISFC Consolation action at the Indiana State Fair, will be looking to rack up points in the second half of the ISFC races. The Major Bombay filly is driven by Alex Udell and trained by Robert Wyman. Photo by Dean Gillette

Fans at the Elkhart Co. Fairgrounds will also see a pair of nice horses from the Justin White Stable as Kazans Power looks to pick up his fifth win of the year in the two-year-old colt and gelding trot and Pop Secret takes on a talented field in the final division of the two-year-old colt and gelding trot. Kazans Power starts from post three in the six-horse lineup set for the eighth race while Pop Secret starts from post three for the third and final division of two-year-old trotting colts in race 10. Joey Putnam will drive both freshman trotters.

Racing for the 19-race card at the Elkhart County Fairgrounds is set to conclude at approximately 3 p.m. Monday, Aug. 19.