The Indiana Sired Fair Circuit (ISFC) gets back in action after a two week hiatus following the Championships at the Indiana State Fair. Many horsemen have turned out for the next fair on the schedule with 19 races slated for the Miami County Fairgrounds in Converse Friday, Aug. 24. 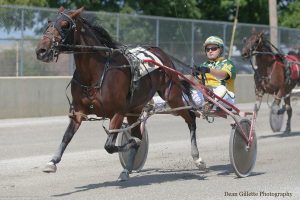 Zach Miller rallies to victory at an earlier event at his home track at Converse. (Photo by Dean Gillette)

One of the horses competing on the Friday, Aug. 24 racing program at Converse is Victoria Swan from the Tim Gilliland Stable. The Swan for All three-year-old filly trotter, owned by Patty and Nat Hill IV of Bloomington, Ind. was one of the horses on display at the Indiana State Fair in the historic Speed Barns. Victoria Swan, accompanied by Nat, greeted fair goers who came in to see the horses and learn more about racing, courtesy of the Indiana Standardbred Breed Development. Victoria Swan begins from post one in Race 17 with Jordan Ross aboard.

The next stop will be the Elite races held Tuesday, Aug. 28 at the Indiana State Fairgrounds.