The very first session of qualifiers for the 2020 season will feature nine races at Harrah’s Hoosier Park Saturday, March 14. Beginning at 10 a.m., a total of 50 horses spread over six pacing events and three trotting events will qualify in anticipation of opening night Friday, March 27. 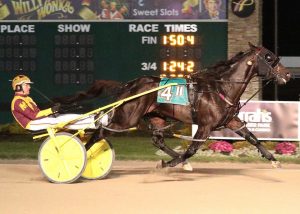 Beckhams Z Tam, with Ricky Macomber Jr., will make his 2020 debut in the first qualifier of the meet Sat. March 14 at Harrah’s Hoosier Park. Photo by Dean Gillette

Included in the first qualifier is 2017 Breeders Crown Champion Beckhams Z Tam. The Always a Virgin colt, now six, will be making his first appearance on the track for 2020. Trained by Jamie Macomber, Beckhams Z Tam will work to add to his career stat line of 17 wins and more than $778,000 in career earnings. Ricky Macomber Jr. is slated to drive from post five.

Glorious Prince, a full brother to Indiana standout Always A Prince, is also slated to qualify. Trained and driven by Doug Rideout, the four-year-old Always A Virgin gelding will be making his first start of 2020. With a mark of 1:50.2 taken last year at Harrah’s Hoosier Park, Always A Prince starts from post three in the sixth race of the morning.

The next round of qualifiers is slated for 10 a.m. Wednesday, March 18 at Harrah’s Hoosier Park. Following that date, qualifiers will be held on Fridays and Wednesdays at 10 a.m.