Night Pro, the longtime Indiana bred older pacing standout, kicked of 18 qualifiers Saturday, March 23 at Harrah’s Hoosier Park. With opening night less that a week away, the track was filled with horses getting ready for the upcoming 160-day race meet. 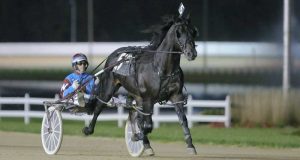 Night Pro, shown with driver Sam Widger, will be pulling double duty in 2019. The nine year old won his qualifier Saturday, March 23 and is also standing his first season at stud at Schwartz Boarding Farm. (Photo by Dean Gillette)

Driven by Dale Decker, Night Pro bided his time out of the gate before rolling to the lead just before the half and taking over for the second half of the race. The Pro Bono Best nine-year-old cruised to a 27. 2 final panel to win by four and one-quarter lengths in 1:53.3. Trained by Larry King, Night Pro is entering his seventh season of racing with earnings nearing $1 million and a career best time of 1:49.0. Unraced at two, the veteran racehorse has earned a season’s best time under the 1:50 time barrier five of his seven racing seasons. He is owned by Decker and is also registered at stud in the state of Indiana for 2019, standing for a price of $2,500 at Schwartz Boarding Farm in Berne, Ind.

Other notable names crossing the wire first during qualifiers was Carol’s Z Tam from the Macomber Stable, Bluebird Reverend from the Bobby Reeser Stable and King Lil Joe trained by Andy Shetler.

Harrah’s Hoosier Park will host a “dress rehearsal” for qualifiers Wednesday, March 27 to test out all procedures for live racing.