Nicole Agosti, longtime groom and trainer with the Wilfong Stable in Indiana and Illinois, is highlighted in a feature story of the February issue of “Hoof Beats.” The New York native talks about her move to the Midwest and her love of horses and harness racing. 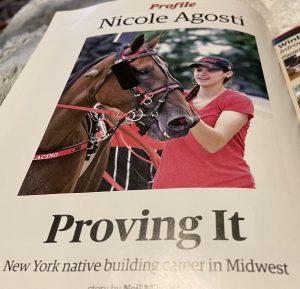 Nicole Agosti of the Wilfong Stable was featured in February issue of Hoof Beats.

Agosti comes from a family involved in racing. Her father, Tom, who now serves as racing secretary at Buffalo Raceway, was a former trainer and even trained Thoroughbreds in upstate New York. According to the story penned by Neil Milbert, Agosti met her now fiancé, Kyle Wilfong, online and made the move to the Midwest in 2012. From that point forward, she has been a valuable member of the Wilfong team that races in both Illinois and Indiana. She took out her trainer’s license in 2018 and her first training win was recorded with Red Red Redneck at Hawthorne with Kyle in the bike.

Agosti was also honored in the fall of 2018 with the Harness Racing Replay’s Caretaker of the Year.

Agosti and Kyle have recently purchased a home in Indiana. They plan to continue to race in Chicago at Hawthorne, but will be based at Harrah’s Hoosier Park where Kyle is one of the top catch drivers on the circuit.