The Newton County Fair in Kentland, Ind. is putting the final touches on their program and facility in anticipation of a huge milestone Monday, July 15 through Saturday, July 20. The fair will celebrate 100 years of operation and to help kick off the event, harness racing will be held Saturday, July 13 beginning at Noon. 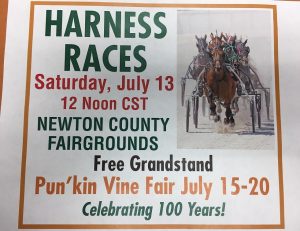 “We are getting ready for the Newton County Pun’kin Vine Fair and to celebrate 100 years,” said Barbara Wilfong, member of the Newton County Historical Society as well as an integral part of ensuring the harness racing program is top notch. “We took out an ad in the newspapers for the harness races on July 13. We also displayed posters in many businesses, and we hung 4 foot by 8 foot banners around the county promoting our races. Radio ads are being run right now on about six different local stations as well.”

Upon arrival, all horsemen will be greeted by a complimentary breakfast in the barn area. Also, all winners, who generally are presented with a blanket, will be awarded a special commemorative plaque for each race featuring the 100th anniversary logo. The logo was designed by a local man and selected by a committee from all the designs submitted for the special event.

Affectionately known as the “Pun’kin Vine Fair,” horsemen rally together to support the program each year. After a brief hiatus from racing in the 1960’s, harness racing was brought back in the 1970’s and Lynn Wilfong has served as the track announcer ever since.

Racing fans will enjoy a free grandstand along with several giveaways and contests throughout the afternoon racing card.

For a full story on the 100-year celebration at the Newton County Fair, check out the July issue of the Indiana Standardbred Association Magazine set to hit homes within the next few days.