Harrah’s Hoosier Park’s returning leading trainer and driver teamed up to win the $25,000 Mega Bowl Final Saturday, April 3 as Never Say Never N scored the victory in 1:51.1. Driven by Trace Tetrick, the Tyler George-trained horse scored his second win of 2021 in the evening’s featured final and the first for his new connections. 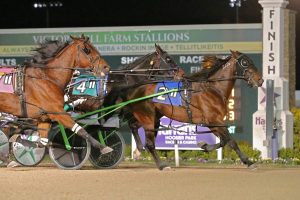 Starting from post two, Never Say Never N got away in mid pack as Rose Run Uriah and Brandon Bates set the early tempo through fractions of :26.3 and :55.2. They had a strong hold by open lengths on the field heading into the stretch, but the field behind them began to take aim at the leaders.

In the stretch, horses fanned out across the track to challenge Rose Run Uriah. Never Say Never N was first up on the outside and surged home for the win by one-half length over Father Ted GB and Ricky Macomber. Rose Run Uriah held strong for third, just a neck back of Father Ted GB.

Never Say Never N is owned by SCP Stable Inc. and George. The eight-year-old son of Bettor’s Delight earned his 26h win in the United States and his 27th overall. After beginning his career in New Zealand at three, winning one race in five starts, he was exported to North America and has developed into a tough racehorse. George and his partners claimed Never Say Never N from his first start at Harrah’s Hoosier Park in the Mega Bowl Series and are now one for one with the veteran pacer. Although he has paced under the 1:50 time barrier several times, his career mark stands at 1:50.0 taken as a five-year-old and a seven-year-old at Harrah’s Hoosier Park.

Earlier in the evening, Ideal’s Nicole and Michael Oosting were victorious in The USTA Series Final. The duo turned in a gate to wire effort for the win in 1:53.1. Sweet Sally Sue and Tetrick came charging hard late in the race, just missing the win by a head. Grimalkin and Sam Widger finished third.

Trained by Hector Herrera, Ideal’s Nicole was the second choice on the board, paying $8.60 for the win. The Net Ten EOM six-year-old mare is owned by Garcia Power Inc. She was bred by Raymond Graber Jr.