The Shelby County Fairgrounds has a unique visitor. Ana Malak N, a five-year-old stallion from New Zealand, is currently in training at the half-mile track. The son of Bettor’s Delight, one of New Zealand’s premier stallions, was recently purchased by Jeff Cullipher of Pendleton, Ind. and Tom Pollack of Pennsylvania and was in need of a place to go due to Covid-19 restrictions in place. 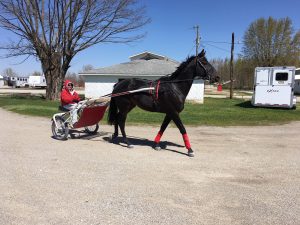 Ana Malak N and Jackie Ricks return to the barn after track work at the Shelby County Fairgrounds. Photo by Tammy Knox

“We had purchased him and made arrangements for his travel to the United States before all of this happened with the shutdown,” said Cullipher, who trains 35 currently stabled at Harrah’s Hoosier Park. “I really didn’t know if he could make it (to the United States), but it turned out everything was on schedule and he arrived in Chicago.”

Ana Malik N was one of 17 horses on the flight from Auckland, New Zealand into Chicago. Upon arrival, he and the other horses were placed into mandatory quarantine for 17 days, a regular process for horses shipping into the United States. Once he was released, Cullipher found himself with another issue. Where would he be able to place the New Zealand stallion until restrictions were lifted at Harrah’s Hoosier Park? The track has not allowed any new horses or individuals on the grounds since Saturday, March 14 to comply with state regulations currently in place by the state of Indiana.

“I had to find a place for him since he couldn’t come into my barn at Hoosier Park,” said Cullipher. “So, we turned him out for about a week at Brooke Nickells’ farm close to the track, and then Jackie Ricks, who works for me, told me she had four stalls at the Shelby County Fairgrounds, so we sent him to Shelbyville. Jackie took him and will get him started and we hope he will be ready to go once we start back racing.”

Ana Malak N is now in training with Ricks, who is a native of Canada but has been a resident of Shelbyville for more than a decade. She has worked for Cullipher for the past year and a half, and is a former trainer on the Indiana Standardbred racing circuit.

Ricks makes her daily trip to Harrah’s Hoosier Park to work with the horses in Cullipher’s barn under her care and then comes to the Shelby County Fairgrounds each afternoon to work with Ana Malak. So far, she likes what she sees in the 16-plus hand black horse from “down under.”

“He’s a really nice horse to be around and he was a really good racehorse in New Zealand,” said Ricks. “They have several stories about him racing down there (New Zealand and Australia). It worked out well for him to stable here until he can get on the track at Hoosier Park.”

Ana Malik N (the N behind his name represents his origin of birth in New Zealand) left Australia with 11 wins in 25 career starts and over $300,000 in purse earnings. He is a Group 1 winner, which is the highest class of competition the country offers. After winning four races in New Zealand, he was sold at the age of four and was racing in Australia when he was acquired by the partnership of Cullipher and Pollack.

“We work with a broker and have purchased a few from New Zealand,” added Cullipher. “We have his full brother (Ana Afreet N) and we had actually called the broker about another horse and he led us to this one. Tom (Pollack) is more involved with the New Zealand horses. He will give me names of ones he’s interested in and I watch the replays. That’s about all you can do before getting them.”

Ana Afreet N has turned out to be a good racehorse for Cullipher and Pollack. He raced four times at Miami Valley in Ohio earning two wins and recording a mile in 1:51.2. He was shipped out to Cullipher’s New Jersey barn where he was prepping to race before the shutdown occurred. His new connections are hoping Ana Malik, the older of the two, will be just as competitive as the younger Ana Afreet N has been so far.

Until he can display his talents, Ana Malak N will continue to train in Shelbyville with hopes of a big future ahead of him in the United States.