Caesars Entertainment has a plan to upgrade several facets of its tracks in Indiana. One of the first to be implemented at Harrah’s Hoosier Park was the full surveillance system in the barn area. 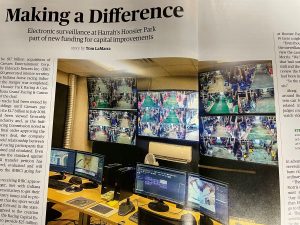 The new surveillance system at Harrah’s Hoosier Park was recently featured in “Hoof Beats” in a story titled “Making a Difference” written by Tom LaMarra.

The new system, which covers all 650 stalls on the backstretch, is the first of its kind at a harness track in the United States and was installed for a price tag of $1.5 million. The state of the art equipment is part of a five-year plan for capital improvements at the Indiana properties, including Indiana Grand, which is receiving an additional barn and dormitory under construction right now.

Headed by Joe Morris, senior vice president of racing for Caesars Entertainment Racing, noted a similar system was placed into Santa Anita and said, “The integrity of racing goes up exponentially, and it’s actually to the trainers’ benefit.”

According to the article in “Hoof Beat” penned by Tom LaMarra, a total of 560 cameras are included in the project with 360 of those capable of rotating. The digital recorders can store 20 days of video. The system has been operational since June.

In addition to the surveillance system, Hoosier Park is adding another 45 stalls with the rebuild of Barn 4. The surveillance system provides not only integrity support in the industry, but also provides security and safety for those stabled on the grounds as well as horses brought into the two paddocks during racing.