With a new year comes a new board into the Indiana Standardbred Association (ISA). The directors met for the first time as a new unit Monday, Jan. 7, 2019. One of the items on the agenda was to elect new officers and for the first time since 2010, a new president will lead the organization. 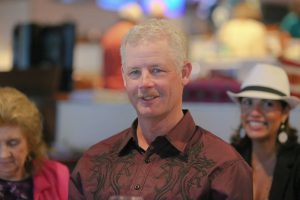 Joe Putnam, longtime horseman and ISA director, has been elected president of the board for 2019. (Photo by Dean Gillette)

Joe Putnam, longtime ISA director and Indiana horseman, was elected as the new ISA President. A native of Michigan, Putnam relocated to Indiana in 1995 and currently resides in Pendleton, Ind. with his wife, Lisa, and his son, Joey, who is now driving. He has campaigned numerous Indiana Sires Stakes champions and has also invested in the industry, including Midwest Harness Supply and a training facility in Markleville, Ind. Putnam has served for many years on the ISA Board as 1st Vice President.

The 15 members of the board of directors will also move into committees, which are currently being formed for the upcoming year.