Topville Alexander and Bradley Ferguson made their third start of 2022 an impressive performance, scoring an upset in the $16,000 Indiana Sires Stakes eligible pace for sophomore colts and geldings. The gelding earned the win in 1:50.3. 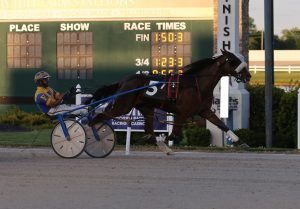 Topville Alexander and Bradley Ferguson made their first win of 2022 a new lifetime mark effort of 1:50.3 Tues. June 7 at Harrah’s Hoosier Park. Photo by Dean Gillette

Starting from post five, Topville Alexander got away near the back of the pack as Luckbewithalex and John DeLong set the first fraction of :26.4. Sure Thing Herman and Trace Tetrick then took over at the half in :55.2 before experiencing an interference break, placing Luckbewithalex back on the lead at the three-quarters. Topville Alexander began to make up some ground for the stretch drive.

In the stretch, Topville Alexander hit another gear and paced home in :26.2 for the win by three-quarters of a length over Keep Score and Sam Widger, who also closed briskly for second. I’m the Prince and Joey Putnam finished third after traveling first over.

Topville Alexander paid $37.20 for the win. The JK Endofanera gelding is owned and trained by Randy Hatton. Merle Yoder bred the gelding who earned his fourth career win. He is closing in on $50,000 in career earnings for Hatton, who purchased him for $7,000 out of the Hoosier Classic Yearling Sale.

In the pacing filly side of the Indiana Sires Stakes eligible pace, Heidis Image and Joey Putnam also scored a new career best. Starting from post six, Heidis Image pursued the front from the gate, reaching the quarter in :26.2 on the outside before moving onto the lead, posting the rest of the fractions. In the stretch, Heidis Image began to pull away from the field and was an eventual winner by two and three-quarter lengths. Need to Breathe and Charlie Conrad finished second over Cats Image and Ricky Macomber Jr. for third.

Heidis Image was the favorite of the field, paying $4.00. It was the second win of the year in six starts for the Rockin Image sophomore, who won in 1:51.1. Trained by Joe Putnam, she now has four career wins and more than $31,000 in earnings for owners Philip Brummel and Gone Coastal Farms of Michigan. Willis Schwartz bred the filly. Her connections purchased her out of the Blooded Horse Sale as a yearling for $8,500.