According to a press release by the Indiana Standardbred Breed Development, a total of 14 new stallions have been added to the roster in Indiana for the upcoming 2019 breeding season. Several of the stallions will be featured in ads in the upcoming Indiana Standardbred Association (ISA) magazine set to arrive in homes in mid-December and they will also be included in the annual 2019 Stallion Directory, which is set to be mailed the first week of January 2019. 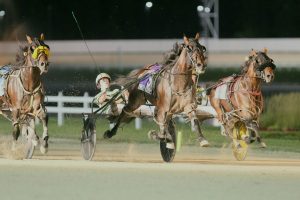 Check Six with Yannick Gingras is headed to victory in the 2017 Dan Patch Stakes at Hoosier Park, his quickest career time. He will stand at stud at Ivy Lane Farm in Goshen, Ind. beginning in 2019. (Photo by Dean Gillette)

Included on the list of impressive additions to the Indiana breeding program is 2017 Dan Patch Stakes winner Check Six, who was featured on the cover of the September 2017 issue of the ISA Magazine. A son of Somebeachsomewhere, Check Six brings impressive stats to the Hoosier State with 19 wins in 69 starts and purse earnings in excess of $1.6 million. His quickest time was taken as a four-year-old in the 2017 Dan Patch Stakes at Hoosier Park in 1:48.1. The five-year-old, who completed his racing career Oct. 20, 2018 with a win at The Meadowlands, joins the stallion roster at Ivy Lane Farm in Goshen, Ind.

Another familiar name to Indiana horsemen is longtime Invitational veteran Night Pro, who will stand at Schwartz Boarding Farm in Berne, Ind. The Pro Bono Best stallion last competed at Hollywood Gaming Dayton Nov. 24, 2018 where he just missed the win in the Open Pace by a head in 1:50.0. Unraced at two, Night Pro heads to the stallion ranks as an eight-year-old with 59 wins in 131 starts and in excess of $930,000 in purse earnings with a best time of 1:49.0 taken at Hoosier Park in 2013 at three.

New trotting stallions offered in Indiana for 2019 include Major Athens at Hoosier Standardbred Farm in Montgomery, Ind. and Helpisontheway, who is headed to Maple Lane Farm in Grabill, Ind. Major Athens, a son of Andover Hall, made his final start at Woodbine in January 2018. He picked up his career best time of 1:53.2 at Mohawk Raceway in 2017 at the age of seven. He has 27 wins in 112 starts for purse earnings of more than $774,000. Helpisontheway, a son of Chapter Seven, retires at three with a career best time of 1:51.4 and purse earnings over $610,000 with 10 wins in 24 starts.