Now that the Indiana Sired Fair Circuit (ISFC) has completed for the year, many of the horses on that circuit have transitioned over to pari-mutuel racing at Harrah’s Hoosier Park. One of those horses that has adapted well is Dojea Gigi, who took a new career best time Tuesday, Sept. 29. 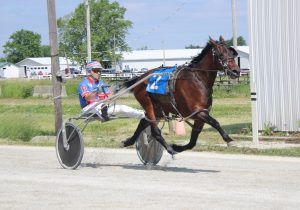 Co-owned, trained and driven by Mike Peterson, Dojea Gigi began her journey from post three, getting away in mid pack as Rockin Runaway and Andy Shetler passed by the first quarter in :28.0. Peterson got Dojea Gigi out and rolling down the backside, reaching the top just after the halfway point in :57.4. From there Peterson kept the three-year-old Tellitlikeitis filly focused, pacing home in :28.2 for the win in 1:55.4. Sweet Talkin Gypsy and LeWayne Miller finished second followed by Moscato, another ISFC contender this year, who finished third for trainer-driver Charlie Conrad.

It was the second win of the year in 11 starts for Dojea Gigi, who is co-owned with Gary Peterson. The filly is out of the tough race mare Maid’s Last Work, who competed on the Indiana circuit during her career, earning six figures and a career best time of 1:53.3. Dojea Stables bred Dojea Gigi, who is a full sister to Dojea Rita, winner of more than $164,000 with a career best time of 1:51.0.

Later on the card Tuesday, No Quarter and Trace Tetrick scored a gate to wire victory in the $19.750 Larry Rheinheimer Memorial. Trained by Brian Brown, No Quarter was a winner by one and one-half lengths in 1:49.4 as the favorite of the field. Pekeson N and John DeLong finished second over Leon David and Peter Wrenn for third.

No Quarter is a three-year-old son of Somebeachsomewhere. Country Club Acres, Joe Sibrocco and Milton Leeman own the Hanover Shoe Farms product.