Shnitledosomethin, the former Indiana Sires Stakes champ, took a new lifetime mark in his latest win on the East Coast, stopping the timer in 1:49.1 at The Meadowlands Saturday, June 8. The Fred and Ginger four-year-old stallion now has 10 wins and more than $614,000 in career earnings. 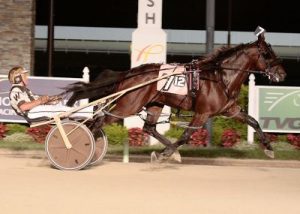 Trained by Dylan Davis, Shnitzledosomethin and Corey Callahan traveled first over and kept bearing down on leader and race favorite Albergo Hanover. The Indiana bred stallion then fended off Hayden Hanover and Andy Miller in the final steps, posting a :25.4 final panel for the win by a head over Hayden Hanover. Rock Lights and J. Harris finished third.

Shnitzledosomethin started out his career under his breeder Aaron Stutzman of Goshen, Ind. before being sold after his second qualifier to Davis, who has campaigned the colt ever since. Stutzman still owns Shnitzledosomethin’s dam, Summer N Sand, and has a yearling filly by Always A Virgin.

Shnitzledosomethin is the most successful offspring of Fred and Ginger, who earned over $1 million in his career and took a mark of 1:47.3. Other top products of the Real Artist stallion include Hilltop Ginger and Mystical Thread.