Brookview Darius had his sights set on the finish line and scored the win in the $25,000 Indiana Sired Mini Series Saturday, July 30 at Harrah’s Hoosier Park. Guided by Trace Tetrick, the freshman trotter was a winner in 1:57.1. 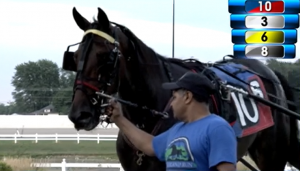 Starting from the second tier, Brookview Darius was not an impact horse at the start and got away in mid pack as Prince Henry and Brandon Bates rallied out to the lead from post one, setting the first fraction at :28.4. Spell Goodlookin and Dan Shetler took their turn on the lead at the half in :58.1, leading the way to the stretch and past the three-quarters in 1:28.4.

In the stretch, Ascent and Peter Wrenn had led the outer flow toward the leaders in first over fashion with Brookview Darius part of that flow. Tetrick tipped Brookview Darius to the outside and unleashed a final panel in :27.4, defeating Ascent by three-quarters of a length for the win. Long Dan and Bradley Ferguson rallied up late for third.

Brookview Darius paid $3.20 for the win as the favorite of the field. The Swan for All gelding is trained by Erv Miller for owners The Kales Company, Engel Stable of IL and Louis Willinger. Brookview Farms bred the trotter, who earned his first win in the mini series final. A son of Witty’s Winner, who has a mark of 1:54.4 herself, Brookview Darius is the younger brother of trotting standout Brookview Bolt, who has a mark of 1:53.1 and more than $432,000 and is still racing. The family has a yearling brother named Brookview El Zorro by Swan in a Million, who will be available at the sales this fall.

From young trotters just getting started to seasoned veterans. The evening also featured the top older trotters in the state in the $22,000 Open Pace, tagged as the Blue’s Beauty Bar. Guided by Sam Widger, Majestic Player A got a perfect trip to the stretch in the two-hole behind Dunbar Hall and Trace Tetrick, who set fractions of :26.4, :55.0 and 1:23.4. In the stretch, Majestic Player A moved around for the win in 1:51.3, a final quarter in :27.2. Brookview Bolt, whose younger full brother Brookview Darius was a winner later in the card, finished one and one-half lengths back in second over Timon AS and Michael Oosting for third.

Trained by Walter Haynes Jr., Majestic Player A was the favorite of the field, paying $4.00. The now eight-year-old son of Majestic Son, who was imported by owners Jeff Fought Racing, Brian Carsey and John McGill a few years ago, is now three for six this season. Overall, he has 24 wins in the United States and 39 total, with 15 additional wins down under. His quickest time remains at 1:51.1 taken as a six-year-old and matched last year at seven, both miles at Harrah’s Hoosier Park. He also moved over the half-million dollar mark with the win.