Go On BB was one of the toughest Indiana sired race mares to ever step on the track. Now, the next generation of fillies and mares are showcased in the Go on BB Series at Harrah’s Hoosier Park. The series, going for $11,000 in the preliminary legs, held its second round Thursday, May 12. 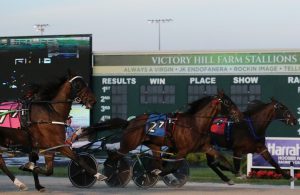 Need to Breathe and Charlie Conrad (inside) fended off challengers at the wire to score a new lifetime mark in the second round of the Go On BB Series at Harrah’s Hoosier Park. Photo by Dean Gillette

The second of two divisions on the card produced an exciting finish as Need to Breathe, Hugs and Kisses and Gonna Be Good finished together across the track at the wire. Need to Breathe, driven by Charlie Conrad, got the nod after the tight three-horse photo.

Starting from post one, Need to Breathe had an easy early path to the front, but Lucky Dottie and Jordan Ross left alertly from the middle of the track and posted the first fraction of :27.3. Down the backside, Conrad moved Need to Breathe to the outside and slid into the lead position before the half in :56.4. Around the turn, Hugs and Kisses and Sam Widger began to challenge Need to Breathe from the outside. The two horses were locked in a battle down the stretch before Gonna Be Good and Trace Tetrick joined in on the search for the wire. In the end, Need to Breathe held her ground along the inside by a neck to score the win in 1:52.4. Hugs and Kisses finished second between horses with Gonna Be Good finishing third thanks to a :26.2 final panel.

Need to Breathe paid $9.40 for the win. The three-year-old daughter of Riggins is owned and trained by Mike Hollenback, who bred the filly with Charlie Kline. The mile was a new lifetime mark for Need to Breathe, who is now two for three in 2022. She increased her career bankroll to more than $28,000 with the win in the Go on BB Series.

Earlier in the night, the other division of the Go on BB series was held with Bettagettajetta and Brandon Bates scoring the win in 1:52.0. The duo jumped out to an early lead and never looked back, striding away from the field by two lengths at the wire, a final quarter in :28.0. Cats Image and Ricky Macomber Jr. finished second in a tight photo over She’sahotmuffler and Atlee Bender.

Bettagettajetta was the favorite of the field, paying $2.80 for the win. Trained by Kenneth Kinner, the four-year-old Always a Virgin mare is also owned by Kinner. Chapel Ridge Farm bred the mare, who is two for four this year. The mile was also a new lifetime mark for Bettagettajetta, who was a $16,000 purchase out of the Hoosier Classic Yearling Sale.