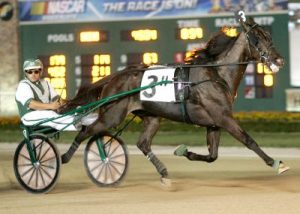 Natural Herbie and Verlin Yoder, shown in a previous win at Harrah’s Hoosier Park, made their 2019 debut a winning one Saturday, April 27. (Photo by Linscott Photography)

Natural Herbie came into the race off one qualifier 20 days earlier, which proved to prep the veteran trotter. He rallied to the front from the start and had complete control of the field nearly all the way around the track, posting a final panel in :28 seconds for the victory in 1:55.4. Bo I See Time and Kyle Wilfong finished second while Texican and Sam Widger finished third.

Owned, trained and driven by Yoder, Natural Herbie now has 41 career wins in 113 career starts. His bankroll now exceeds $1.1 million and his best career time of 1:51.4 was taken as a four-year-old.

Natural Herbie’s four-year-old season was his breakout year. He ended the year on a four-race win streak that included the $250,000 International Trot at Yonkers where he set a world record. Earlier that year, he was also a winner in the $75,000 Vincennes at The Meadowlands on Hambletonian Day.

John Schmucker of Grabill, Ind. is the breeder for Natural Herbie. Yoder purchased him from the 2011 Indiana Premier Sale for $4,700.