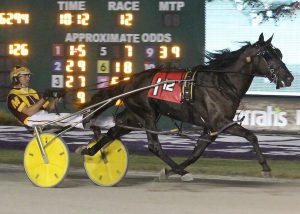 Starting from post three, Nassau Desire got away well from the gate in the third spot behind leader Medoland Bosa and Brady Galliers through the first quarter in :26.3. He was quickly shuffled back as Double Down Duke and Mitchell Cushing formed the outer flow heading to the half in :55.4. In the final half, Nassau Desire found the room he needed to move out and pass his opponents in the stretch for the win at the wire by one-half length over Double Down Duke. Latissimus Hanover and Dan Noble finished third.

It was his fifth win of his career for Nassau Desire. He is nearing $100,000 in earnings and his career best time stands at 1:50.2 taken last year at Harrah’s Hoosier Park.

Another hard hitter from Indiana was in the winner’s circle Monday in Ohio as JD’s Chancey Design and Trevor Smith scored a win in the final race on the program. Starting from post four, JDs Chancey Design sat patiently in mid pack early on before moving into the outer flow of traffic heading to the half in :57.1. From there, he was forced to tip three-wide in the final turn and was able to endure the stretch drive for the win in 1:56.2. Ville Valo and Brett Miller finished second over Jimmy Ray Lou and Mitchell Cushing for third.

JDs Chancey Design is trained by Travis Redden and is owned by Kenneth Kirkpatrick. Marvin Miller bred the eight-year-old gelding by Shadyshark Hanover. He now has in excess of $116,000 in earnings and 30 career wins, mainly racing in the claiming ranks. His career best time of 1:51.1 was taken at three at The Red Mile. He has raced for his current connections since mid-2019 and has had eight owners during his racing career.