Many sons and daughters of the Indiana stallion Real Desire have proven to get better with age. Several of the older horses are currently racing in Ohio this winter, including Nassau Desire, who scored another win Thursday, March 10 at Miami Valley Raceway. It was also a big night for the broodmare Nassau Loop who had a daily double in the race. 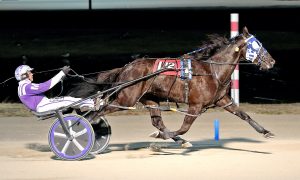 Nassau Desire and Brett Miller were favored in the $30,000 claiming event, and with post one, they had a good one-two punch to take on the full field of 10. The gelding used some early energy for positioning, but Hoosier Celebrity and Tony Hall pushed the pace the most from the outside as Mingo Joel and Dan Noble also left for the lead, with three horses across the track at the quarter in :26.3. Nassau Desire was content to let the other two move onto the lead but was flushed out at the half in :55.1 and led the outer flow to the three-quarters in 1:22.3, flushing out Captain Dolmio N and Tyler Smith to grab a little cover for the final turn.

In the stretch, Nassau Desire took over and was well under wraps as he crossed under the finish line, winning by one and three-quarter lengths in 1:51.3. Major Nemesis and Trace Tetrick rallied up late for second followed by Captain Dolmio N, who maintained ground for third.

Nassau Desire paid $5.00 for the win. The five-year-old is owned by Ken Rucker and The Panhellenic Stable. Rucker also trains the gelding, who as bred by Steiner Stock Farm of Ohio. Nassau Desire was claimed out of the race by Brian Witt along with Hoosier Celebrity, who was claimed by the Burke Stable. Nassau Desire has been in and out of the Rucker barn several times in the past year and recently returned to the barn in early February, getting four starts in for Rucker before being claimed out of this start. He leaves the barn on a two-race win streak.

Nassau Desire is now two for seven in 2022. He took his career best time of 1:50.1 last summer at Harrah’s Hoosier Park and is closing in on $200,000 in career earnings. Overall, he is 15 for 63 during his career. He was one of 17 foals sold at auction by Real Desire and was the second highest priced yearling of the group, bringing $22,000 through the sales ring at the Hoosier Classic Yearling Sale.

Ironically, Nassau Desire is a half brother to Major Nemesis, who finished second in the race. Major Nemesis has more than $300,000 in career earnings with a career best mark of 1:49.3.