He was once a winner on the Indiana Sired Fair Circuit. Now Nasey can be called an Indiana Sires Stakes winner. The sophomore trotting colt earned his first win in ISS action Thursday, Oct. 6 in the eighth leg of action at Harrah’s Hoosier Park. 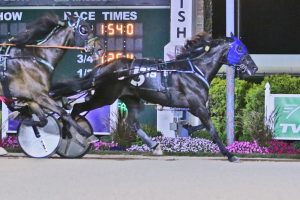 Nasey and Sam Widger move up the inside for the Indiana Sires Stakes win Thursday, Oct. 6 at Harrah’s Hoosier Park. Photo by Dean Gillette

Nasey and driver Sam Widger snagged the two-hole early right behind Epic Dreamer and Rick Plano, who carried them through fractions of :28.0, :56.3 and 1:25.4. In the stretch, Nasey found the room he needed and took over, trotting home in :28.0 to earn the win by one-half length in 1:54.0, equaling his best time taken earlier this summer at Harrah’s Hoosier Park. Iwon’t Backdown AS and Tony Hall finished second over Yo Mister and James Yoder, who came charging late to finish third.

Nasey was a longshot in the field, paying $29.40 to win. The Pilgrims Chuckie gelding is owned by Black and White Stable and trained by Walter Haynes Jr. Roman Stoll bred the trotter, who recently added trotting hopples. Nasey is now 14 for 37 lifetime and is nearing $100,000 in career earnings. According to the stats at the bottom of the racing program, he had the best win percentage of the field at 36 percent.

Earlier in the night, Adamsville Road and Widger were winners in the other division of Indiana Sires Stakes action for three-year-old colt and geldings. The Swan for All gelding waited until the stretch to advance, chasing down the 2022 near perfect trotter Ponda Adventure and Trace Tetrick. Adamsville Road was a winner by a neck over Ponda Adventure, who is now 10 for 12 in 2022. Muscledover and John DeLong finished third.

Adamsville Road was a mild upset, paying $15.80 for the win. It was his sixth win of the season in 14 starts for trainer Tyler George and owner Mel Rose Stable and Joe Nesselroad. He was also a winner in the seventh leg, placing him on a two-race win streak heading to the final. The time of the mile was 1:52.3, a new lifetime mark for Adamsville Road. Joyce McClelland of Ohio bred the trotter, who now has more than $150,000 on his card.